Pokemon Rusty is one of the weird game which is developed by Dorkly which is based on Pokemon Fire Red Version. Several new mini-missions makes the game interesting and more amazing for all the pokemon rom hacks lovers. Download Pokemon Rusty for free from Pokemonhost, as the download link is available at the end of this article.

This game is entirely based on fire red version which has a really funny storyline and will inspire you to play the game until the end. Actually, this game is based upon the funny stories series which was published on Dorkly and thus makes this game looks more funny and weird too. Let’s move below to the next section of this article for exploring the amazing features of pokemon rusty version game for free. 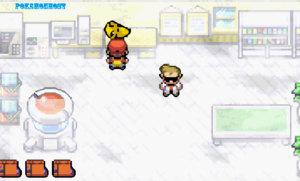 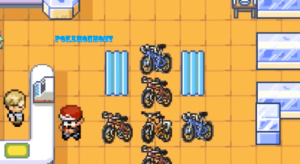 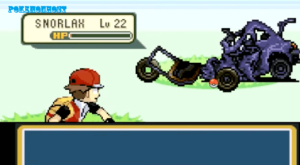 As the game starts you are in the Pallet Town where different kind of species and pokemon are living. The main lead role of this town is Professor Tree. Your main character is a rusty and weird type which is a little bit funny though. A 10-Year-old boy who is actually a trainer in the area of Pallet whoes responsibility is to train a different kind of pokemon characters in the area. Professor Tree is going to qive you the Kakuna soon as you want to become one of the master pokemon trainers in this area.

As far as the Battle system of the game is concerned, it is enhanced a lot while making the game more complex. Now all of your enemies teams are ready for having a battle with your team. You have to make a proper team as soon as possible because all of rivals and enemies are ready for you to be your challengers. They will be giving you some challenges like in Pokemon Zeta Omicron ROM, as a Rusty character in the area, you don’t care at all because you are busy in your own tasks and missions. There are a lot of different mini-missions included in the game.

One of the funniest thing about Professor Tree is that he is a chain smoker and therefore you will note that his lab is full of smoke as well. He wears cool black shades in which he looks so much decent. However, he is one of the supportive people i have ever seen so far in the pokemon rom hacks especially in rusty pokemon rom hack for GBA. All the animations effects of battles and moves have been enhanced a lot while making sure that the basic moves are improved from the previous version. The adventures go on with Rusty, discover some really amazing places in nearby regions and uncover more exciting happenings and play Pokemon Rusty until you finish it. More quizzes and puzzles are waiting for you. This game is similar to Pokemon Ethereal Gates ROM

About the Graphics and Battle System:

Graphics of the game are enhanced alot while making some changes in the previous version graphics. The battles effects like battle’s animations makes the game so interesting for you to play and complete almost all the pending missions. Some difficulty levels has been included in the game which makes all the battles a little bit difficult for you to complete. Also, try Pokemon Eclipse Version Game

Note that you have to train all of your pokemon characters as soon as possible, in order to make sure that you win all the battles and challenge happening there. Most of them are quite challenging for you as they are bit harsh and difficult as well. All of the enemies teams are available for the challenges ahead in the game.