Ultra Beasts! Ever since these strange, but cool creatures were introduced to us last year in Pokemon Sun and Moon I gotta say, I’ve really gotten used to them. And when taking a look at all of these ultra beasts, it’s safe to say that all of them are pretty dang strong.

Except Guzzlord that thing sucks… 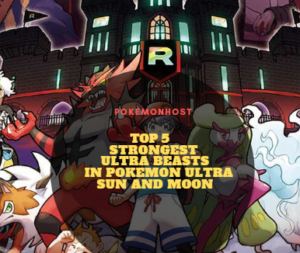 And let me just say that just because there will be some ultra beasts that barely miss out on making the list doesn’t mean that they’re not strong, I just feel that some are better than them. And that’s just it, this article entirely my own opinion so if you disagree with me

Starting off this list we have a pokemon that I completely misunderstood at first, Kartana… dont know what I mean watch this article… But seriously when the drawn sword pokemon Kartana was introduced to us I really didn’t think much of it. I mean it’s just a piece of paper what could it ever dooooo. But oh how wrong was I because kartana is actually one of the strongest ultra beasts of all time. Check Top 5 Hopes For Pokemon Ultra Sun and Ultra Moon

First let’s start off with its typing being grass and steel. Now sure that may seem problematic because it’s 4x weak to fire but really besides that and fighting types those are the only types it has to worry about. And combine that with its enormous amount of resistances you pretty much got yourself a pokemon that can stay on the field for substantial amount of time.

Now of course that 31 special defense is a little worrying but with the right ev investments you should have enough to outspeed most pokemon. And with the moves that this pokemon gets access to not many pokemon are going to live. Typical sets people use for this pokemon are these 2 that I found on smogon, the one on the top is for smogon format and the one on the bottom is for vgc. Both sets are incredibly viable. And with all of this put together it’s no wonder why so many people use kartana.

Definitely one of the strangest pokemon to be introduced to us in Pokemon Ultra Sun and Ultra Moon has to be the fireworks pokemon Blacephalon. Not that strange isn’t cool or anything I just very different. And not that different is a bad thing but you know what I’m just digging myself a hole here. But basically the best way to explain this pokemon, is that it is a better version of chandelure. Also, check Top 5 HARDEST Pokemon To Obtain in Pokemon Ultra Sun and Ultra Moon

The one gripe I’ve had with chandelure, is that it’s way too slow to be viable in the upper tiers. But with Blacephalon’s 107 speed it has the fire power, pun fully intended, and the speed to destroy all of your enemies. Sure it doesn’t have the greatest of defenses, but look at those attack stats, does it really matter?

Now unfortunately this pokemon doesn’t really get that many good moves by level up but it can learn some good tms like flamethrower. And pair an all out attacking moveset with a choice scarf and you got yourself a very strong pokemon.

An Ultra Beast that I think everyone recognizes as one of the best pokemon to use competitively has to be celesteela. At first I didn’t really think much of this pokemon, because it’s stats say that it’s not that amazing at 1 specific category But that’s the thing, the fact that it’s pretty much balanced all around means that it can function well doing almost anything.

But mostly people use it’s awesome dual typing being steel and flying and pair it up with a massive bulky set. And the best part about this pokemon is that it has a wide range of moves to make it probably the most versatile ultra beasts of all time. The highlight moves to me being leech seed heavy slam and flamethrower.

And that’s basically it with its fantastic defensive typing, well-rounded stats, and a large movepool it’s know wonder why this pokemon is so heavily used in both vgc and smogon format. Celesteela is just a beast… alright that was bad

Alright so this next pokemon is mostly known for being a one trick pony, but man is Pheromosa really good at that one trick. I mean there’s really not much to explain here, if you take a look at its stats you pretty much know where I am going here. Really high speed stat plus really good attack stats equals an amazing all out attacker it’s a really simple equation here.

And with the powerful moves that it can learn like Ice beam, hi jump kick, and bug buzz it’s safe to say that you should be your pants right now! And I should also mention that It has a handy utility move in Rapid Spin, which coupled with its excellent Speed allows it to function as a last resort hazard control option. But the problem with pheromosa that just leaves it off the number 1 spot is that its a very very frail pokemon.

If the opposing pokemon manages to survive one of its hits, 1 flying type move or really any move for that matter should be enough to take out pheromosa. But overall this pokemon is a very solid option.

And Finally the number 1 Strongest ultra beast in Pokemon Ultra Sun and Ultra Moon is Naganadel. Yes the new poison dragon pokemon is easily the strongest ultra beast in the entire game. From the start of its use in competitive battle Nagandel shot straight up to ubers and carved itself a useful niche as a great offensive sweeper.

It’s got good typing being poison and dragon and has an awesome movepool allowing this pokemon to really take advantage of its wall-breaking capabilities. The best moves to me being sludge wave, draco meteor, and Fire blast. But most importantly what gives this pokemon the edge over pheromosa is its amazing stats. It’s just a lot more balanced and has better chance of taking a couple of hits than pheromosa’s 37 defense stats.