About a year ago I did an article called the top 10 underrated pokemon. And since that article came out I wanted to do an article covering the exact opposite topic, the top 10 Overrated Pokemon. Oh God, I’m gonna get so many dislikes. As you guys know there are some pokemon within the games that do get more attention and credit than they really deserve. 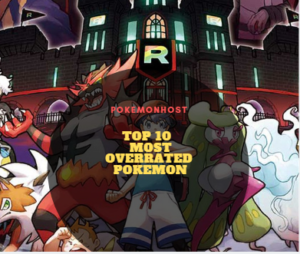 That doesn’t mean that these pokemon are necessarily bad it could just mean that the hype built around it is too much for the pokemon to live up to. So with that out of the way welcome to my top 10 overrated pokemon. And if you guys aren’t a big fan of opinions here than I suggest you go watch something else cause this article won’t be for you.

Starting off this list we have the god pokemon itself Arceus. Let me just say before I go in that Arceus is a very very good pokemon, I mean it’s banned in VGC tournaments for a reason. But you’re labelled as the god of all pokemon you are bound to be a little overrated. To start Its design doesn’t look cool at all it just looks like a goat that got stuck between a fence. Also, check out Top 5 WORST Starter Pokemon

Then there also comes the plates. I personally don’t think they’re that cool and since gen 6 came out there have been better ways to change your type. These are very small complaints arceus is still very good in battle but again if you’re labeled by the fans as the god and creator of all pokemon then you’re going to set yourself up to be overrated. But since this pokemon is very overpowered it’s just a little overrated so please don’t hate me too much.

When gen 2 pokemon were released in pokemon go I spent a lot of time researching the most powerful and useful pokemon to use. And it turned out that Tyranitar was the best non legendary in pokemon go, not just out of the gen 2 pokemon, but gen 1 too. No matter what you say about pokemon go it does bring a lot of new and old fans back to playing the pokemon games. Check out Top 5 WORST Pokemon Dual Types

You have fairy types, Fighting types which are quad effective and very popular in the meta game, and just about everybody and there mom runs earthquake now. Even now sandstorm which is a big part to why tyranitar is so good only lasts for 5 turns now. Now don’t get me wrong tyranitar and especially mega tyranitar are very good in battle but it’s just not as good as most regular pokemon fans think.

And here is where the dislikes will be at an all time high. Mewtwo is overrated, I don’t care how you slice it just is. First off mewtwo is my second favorite legendary pokemon so by no means do I hate mewtwo it really is just the fans that piss me off.

I don’t care if you’re the first legendary the last legendary the in between legendary or can fucking poop rainbows there are plenty of other pokemon that need this mega stat boost. Plus I also think it’s really unfair to get on charizard for having 2 megas, and trust me I’ll get to him later, but then turn around and not give any flak to mewtwo for doing the same thing. It’s just hypocritical.

Generation 5 was a very interesting time for the pokemon franchise. It brought a lot of awesome, cool, and crazy looking pokemon. But it also brought us Lucario 2.0 or the Lucario of Unova Zoroark. Oh god the hate coming for this article. Now I’m obviously just kidding about that, kind of, but really this pokemon get’s a lot of attention.

(Because they wanted to introduce the new region) so then why didn’t they just showcase the legendary pokemon? Look I get people love this pokemon but taking a look at its battle stats and design was it really necessary for it to receive this much attention. I mean they used zoroark as the first pokemon to introduce us to gen 5.

Maybe im a little bit salty because I think regular pokemon shouldn’t get their own movie but it’s true. Use the tv show to focus on the regular pokemon, the movies should be focusing on the legendary pokemon and with a few exceptions they were doing that. Look at it like this if you were making movies that were geared towards legendary pokemon for over 10 years and then later make a movie about a regular pokemon, you’re putting that pokemon in the same breath as the legendaries and does zoroark deserve that?

Coming in at number 6 we have the only gen 3 pokemon to make the list gardevoir. It’s kind of hard to explain why Gardevoir is overrated so ill do my best to explain. Ever since this pokemon was introduced to us in 2002 fans could not get over the fact that this pokemon looked very feminine. An due to that fact none of us can ever search gardevoir on the internet because of stupid fans oversexualizing a pokemon.

My childhood is literally ruined now. But anger aside due to the undying popularity of this pokemon it is bound to become a bit overrated.And come on, its not good in battle and there are far better psychic types. Now I want to make it clear hear that I am only referring to regular gardevoir before gen 6 and not mega gardevoir because prior to mega evolutions even existing this pokemon was receiving a lot of attention.

Maybe again my emotions are factoring into this but you know what i don’t care you guys ruined my childhood with this shit.

I never thought I would be saying this about one of my favorite gen 6 mons but greninja has become very overrated. I know what you’re gonna say, how can the best starter in kalos be overrated right? Well it’s largly in part due to the anime. In the XYZ anime greninja and the bond it had with ash became almost like the center focus of the entire series.

And It not only got the spotlight there, it was also featured in the sun and moon demo, smash bros, and even got its own special form. This pokemon was even voted the most popular pokemon in japan thanks to a poll that was taken Back in June. It beat out Mewtwo, Arceus, Mew, and even the great Pikachu.

But does this pokemon really deserve all this praise and attention? Sure its a great pokemon and all but when you are faced with monumental levels of hype you’re going to fall short in some ways. Greninja’s downfall isn’t with it’s abilities as a pokemon but the with the fans that overhype this pokemon.

Speaking of overhyped let’s talk about thequote unquote best Dragon type in all the games Garchomp.Look i’m not gonna say garchomp is bad or anything, because I would be stupid if I said that but people tend to over exaggerate how good this pokemon really is. Its great in competitive battle, it has many uses, but it’s not the best thing in the world it has weaknesses.

In a sense it’s a lot like tyranitar but the difference is more people tend to think Garchomp can win all battles on its own. I think this reasoning is attributed to people’s experiences battling cynthia’s garchomp. For most people that was the first time they’ve ever seen a garchomp and in most cases. Therefore leading everyone to believe this pokemon wrecks everything which is just not true.

Not to mention this pokemon also got a very undeserved and unnecessary mega evolution that actually was worse than its normal form. That speed drop really leaves it open for fast ice attacks. Again this pokemon is very good I just think people need to remember that it has weaknesses too.

Aura I am sorry, I hope you can forgive me after this, but your mascot is overrated as hell. Maybe not as overrated as my mascot but still very overrated. This pokemon has it all from its own movie, a colt following, being the first mega evolution you see in the x and y game, to even pretty ok stats.

But again Like I said for Zoroark I really don’t think any pokemon besides legendaries should have its own movie, especially if your using said pokemon to introduce the new pokemon region. You should always want to use the cover stars of the next pokemon game to introduce you to the new region It just makes sense that way.

But there are more reasons as to why this pokemon is so overrated its heavily featured everywhere, Fans treat it as if it’s a god, and regular lucario isn’t the best thing in the world in competitive battle. It’s pretty average speed combined with its paper defenses really kills this pokemon. Not to mention every pokemon nowadays carries earthquake. Please don’t come at me lucario fans I actually really love lucario, but you have to admit it is a little overrated.

I don’t think anyone here disagrees that pikachu is one of the most overrated pokemon of all time. I mean it’s the face of the entire franchise and the most recognizable pokemon ever. And im not saying that’s a bad thing that it’s the face of the company, but the simple fact that its face is everywhere will make new fans believe that this pokemon is actually amazing, which it’s not.

Competitive wise it’s really bad. Sure it may be faster than maybe your average middle stage pokemon but besides that, all his other stats are base 55 or under, which if you didn’t know is really bad. Now again I don’t mind that Pikachu is the face of pokemon, because it really does appeal to both genders. (Effect he said there’s only 2 genders triggered) Guys find it pretty cool looking and girls find it adorable and cute.

But on the flip side new coming fans will think this pokemon is great and will probably not even think about evolving it because of the way ash uses his pikachu. Which is also another thing pikachu in the anime is so freaking good. except for that time it lost to a level 5 snivy. But for the most part pikachu pulled out a lot of key victories.

And come on out of all of you guys that watched the pokemon anime who didn’t want to use a pikachu on their team. You gotta face the facts man Pikachu is a Bit overrated.

Well you guys knew this was coming. As much as this pains me to say it being a charizard fanboy myself, there is no denying that Charizard is the most overrated pokemon of all time. For starters, it’s one of the most recognizable pokemon after pikachu and probably the most popular pokemon as well.

And what does it have to show for it? Putrid stats and a 4x weakness to stealth rocks. This pokemon in the anime is built to look like the most powerful thing in the world when in reality, it really sucks. Like you never see regular charizard in any vgc teams and in the smogon tier list charizard is in NU which is second from the bottom. I will agree that it definitely needed a mega but again no pokemon ever deserves 2 mega evolutions not Mewtwo and definitely not charizard.

And to be honest they really need to stop giving charizard so much attention it just fuels how much more overrated this pokemon actually is.