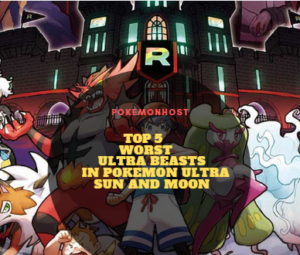 For this article I’ll be taking into account basically everything in the last article, which includes stats, movesets, typing, and how viable it is or isn’t in competitive battle. And I’m gonna be honest here I wouldn’t necessarily deem most of these ultra beasts to be weak, but compared to the other ultra beasts that I put in the last article, they aren’t exactly the strongest either.

But don’t get me wrong, Most of them are very strong let’s not take that away from them I’m just titling it the way it is because well it makes it the least complicated. But of course as always with these kinds of topics this article entirely my own opinion so if you disagree with me I encourage you to let me know in the comments why you think

Starting off this list we have one of the few new Ultra Beast introduced to us in Pokemon Ultra Sun and Ultra Moon, Stakataka or stahkataka I really don’t know at this point. Literally this Pokemon Was So freaking close to making the strongest ultra beasts list, it wasn’t even funny. I mean look at those defenses man that’s insane! Check out Top 5 STRONGEST Eeveelutions in Pokemon

And to go along with those awesome stats it’s also got a pretty decent movepool, the best of them being gyro ball, trick room, and stone edge. and on top of all of that I should also mention that it functions very well in vgc and ou. But what I think just kept stakataka off my strongest ultra beast article is that it’s kinda a little situational.

Now of course one of the glaring weaknesses of this pokemon has to be its speed being at 13. So with that stakataka becomes most useful on a trick room team or just putting trick move on it. And it’s a little annoying that you have to have that one move on your team in order for it to be its most effective. Kind of a nitpick I know but again this pokemon was this close to making the other list, so cut me some slack here.

Pokemon that I actually adored coming into the Pokemon Sun and Moon games happens to be the loveable Parasite pokemon Nihilego! I always loved jellyfish growing up because of the spongebob cartoon and Nihilego always reminded me of my childhood. Also, check Top 5 Most ANNOYING Pokemon

And luckily for me this pokemon not only looked cool to me, but also was very strong on the battlefield. Having good speed and special attack stats plus access to the move Toxic spikes really makes this pokemon very effective. But unfortunately Nihilego also has a fair bit of problems too. To start off it’s got very poor physical bulk and poor defensive typing, which leaves it weak to several common attacking types like ground and steel types. Nihilego’s typing can also hinder it offensively, as it struggles to break past most of the metagame’s common Ground- and Steel-types. I love nihilego but there’s no question it has its weaknesses.

Ok Im gonna be honest here, these next 2 pokemon are really interchangeable here, but I only put Xurkitree here for thumbnail purposes… At least I’m honest right? But on the real though Xurkitree has to be one of my favorite pokemon to come out of alola. I just love the idea behind being based off electrical wires it so cool.

And when you take a look at its stats it’s no question why this pokemon has earned the title of ultra beast, that special attack stat is insane! But with that insane amount of points being put into one stat other areas are going to have to suffer for it. And fortunately that’s where it leads to Xurkitree’s downfall. The major gripe that I think hinders this pokemon from being one of the top tier is that it’s just too slow to get off any attacks.

It suffers from the chandelure problem. Sure it gets access to tail glow but your going to have to set that up, and with it’s pretty frail defenses you better hope you knock out everything. And speaking of Xurkitree’s movepool isn’t the best either, sure it gets access to tail glow, thunderbolt, and dazzling gleam but I feel that there is a severe lack in versatility and makes this pokemon very 1 dimensional.

And unlike pheromosa you dont have the speed with attack to make that not matter. But again that doesn’t mean this pokemon isn’t good, Xurkitree is great!

Like I said this slot and number 3 are both easily interchangeable. But coming in at number 2 we have the swollen pokemon itself, Buzzwole. Again like basically all the other ultra beasts to come before it, Buzzwole is also a very good pokemon competitively. It’s got great physical bulk, a reliable recovery in roost, and can key in on ground, dark and fighting types.

And roost isnt the only good move that buzzwole has, it also gets access to a pretty decent movepool as well. I’ve even seen set’s where this thing works in Uber. But where this pokemon falls short is again in it’s speed stat. But not only in it’s speed but if the opposing player has a special attacker you can pretty much expect it to get ohkoed, especially if they have air slash. That 4x weakness to flying types is a real pain in the neck man. But hey if you can get past that weakness buzzwole is still a great pokemon!

And by A country mile the worst ultra beast in Pokemon Ultra Sun and Ultra moon, and of all time for that matter, is easily Guzzlord. I mean there is no question about it I think even guzzlord fans can admit that this pokemon battle wise is the worst out of all the ultra beasts. First one of the biggest misconceptions about this pokemon, is that it is super bulky… that is not true.

Sure it has the third highest hp stat in all of pokemon, but when you take a look at its defenses, that huge hp doesn’t really matter as much. Its typing also may seem good on the surface giving it some nice resistances to fire, psychic and grass, it actually could not be any less of the truth. Because although yes those resistances are nice you also gain a lot of weaknesses to types like Fighting bug ice and most importantly fairy which is very commonly used and its 4x weak to.

Not to mention that this pokemon is also very slow too so dont expect to be getting an attack off anytime soon. Let’s face it guzzlord just sucks.