With the new Pokemon Let’s Go Pikachu and Let’s Go Eevee trailers fresh in our minds, I think we can all take a step back and say that there was a lot of information given to us there. We got new features, gameplay, battle mechanics, pokemon go integration, and how can we forget, confirmation that there will be a brand new never before seen pokemon coming with these games.

Speculation is all over the place on what this new pokemon could be, but I think it’s safe to say that it will most likely be a generation 8 pokemon. And that’s some really exciting news that just adds more hype to what looks to be a great pokemon game. But with all that being said what exactly will this new pokemon be? And well today while I may not have a clue on what it is, I wanted to make a article describing what new pokemon I’d like to see.

For this list I have rated these pokemon based on design, but I will also go into detail on possible stats and moves for the pokemon. Speaking of which I do not own any of these awesome fakemon designs, all the creators will be credited in the description as well as in the article. 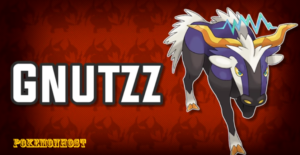 While the years have gone by one of the most common types of animals to appear throughout the pokemon games is the species of cattle known as bovines. I mean tauros, miltank, bouffalant, terrakion, yeah there’s been a lot of them. So when bringing up the possibility of adding another bovine to the pokemon games you’d probably disagree with me and call me crazy. But the species of bovine are much more vast than just cows and buffalos there still so much more awesome animals to explore in this category.

I mean wouldn’t it be awesome to see a pokemon based on a wildebeest? I mean the name alone sounds perfect for a pokemon and when you factor in that the actual animal looks badass, it’s a no-brainer that eventually we have to get this as a pokemon. So a question occurred to me.

And we all know how dumb I can be with questions. Why not use this new pokemon slot to make an awesome wildebeest pokemon? And I think this design made by Lucas costa depicts the idea of a wildebeest pokemon perfectly. What I think speaks to me the most about this design has to be the golden horns on its head. I love the idea of using them as a way to pass an electrical current and just gives the design even more character.

I also have to give a shoutout to the name that lucas came up with. Gnutzz while making sense scientifically is an absolutely hilarious name to have. The amount of memes that can spawn from that name alone is just too funny to think about. And trust me I mean that in a good way I love memes. But with the name and design in mind though I think it’s really a no-brainer that this pokemon has to be a pure electric type. And on that end both lucas and I can agree. Moving on to stats due to Gnutzz’s dex entry stating how it attacks I can see it functioning well as a fast mixed attacker with everything else being pretty decent.

I know these stats might seem too good but I don’t think gamefreak would introduce an average pokemon as the face of gen 8. As for a moveset giving it the standard electric moves like thunder wave, thunderbolt, and wild charge, combined with powerful moves like ice beam, flamethrower, swords dance, and maybe earthquake can make this pokemon really powerful. Gnutzz is not only a great fakemon because of its name, but also because of its design and I would love to see it pop up in a future pokemon game. 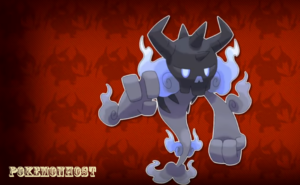 I gotta say I think the ghost typing has to be one of the most interesting types to have come into the pokemon games. Not only is there a spooky mysterious vibe to all of the pokemon, but this typing has produced some of the best designed and lore based pokemon. From rotom, mimikyu, aegislash, chandelure, to even beastly legendary pokemon like giratina.

So when comes to introducing a new pokemon to the world you can’t really do any better than going with a ghost type. That is why I purpose that this design made by smiley would be the perfect introductory pokemon to gen 8. I mean from design alone this thing spells out intimidation. Whether it’s the fiery ghost wisps or the skull like head this is a pokemon you do not want to mess with.

Duscre as smiley likes to call it is classified as a ground ghost type. Ground because im guessing the pokemon was once human and when you pass away you do get buried underground or grinded up into an urn and ghost because well it’s not living. It’s also seen lurking inside tombs so that could also explain why its part ground. I think my favorite thing about this design has to be its pre evolution cryptise I just love how smiley turns something as morbid as a burial urn into something really adorable and fun.

It fits right in with all the other messed up ghost types. As for stats smiley was nice enough to already provide us a full line and to be honest im completely on board with it. With strong defenses and great special attack I think this pokemon could be a really strong asset to a potential team. Pair that with a great moveset like earth power, shadow ball, stealth rocks, and maybe some coverage moves and you got yourself a great physical wall with some wallbreaking capabilities. Duscre would be a great addition to the pokemon family and I would definitely want to have one on my team. 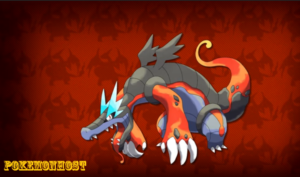 Pseudo-legendary pokemon have been a staple in the pokemon franchise since the very first pokemon games. Gen 1 brought us dragonite, gen 2 had tyranitar, and throughout all the generations we have always gotten at least one of these really strong pokemon. So I thought hey if Gamefreak wanted to introduce an awesome new generation 8 pokemon, why not have it be an absolute banger.

And what I mean by that is having the brand new pokemon be the pseudo legendary of generation 8. And I think the best fakemon that suits this purpose has to be this design made again by smiley. It combines 3 things that I absolutely love, alligators, volcanos, and dragons. All 3 of those things are badass so combining all of them to form a pseudo-legendary pokemon is just a recipe for success.

Crator, as you can probably tell due to its roots and design, is in fact a fire/dragon type. This for sure makes the most sense to me and it’s also just a really good dual typing. Stat wise smiley has this pokemon with a base total of 600 which matches the pseudo legendary credentials. As for the details its got a strong physical and special attack with great physical defense. It’s also got a pretty decent speed and hp stat literally the only thing that isn’t that great about this pokemon is its special defense.

And to pair with these awesome stats I think a great movepool for crator could be something like flare blitz, dragon claw, dragon dance, power whip, or maybe a priority move like aqua jet. I know it may sound weird but a man can dream. Add all of this up together and you definitely have a very strong pokemon. 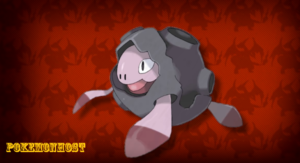 Now I know throughout this entire video we’ve been talking about how the new pokemon could be really strong, but what if Gamefreak went the route of giving us just a really well designed adorable pokemon? Not adorable in the sense of a cute final stage, but im talking about a baby pre evolution.

Chelonite which was pulled straight from one of the best pokemon fan games pokemon sage is the perfect pokemon that suits these criteria. Its design reminds me a lot of pikachu’s not in the sense of aesthetic but how perception of it can be received. Boys I think would find it cool and awesome while girls would see it as cute and adorable. And with that idea in mind I think a pokemon like this would be the perfect introduction for kids because it suits pretty much everyone.

And once Generation 8 officially comes out we can then also release chelonite’s evolution galaxagos which is again from the wonderful people at pokemon sage. I think my favorite thing about this design has to be how the artist made a meteorite as pretty much a shell for the turtle. It’s just a brilliant idea. And with that in mind since the concept combines the idea of a meteorite and a turtle, I think probably the best typing for this pokemon would have to be psychic rock.

Rock because meteor and psychic because well space. Moving on stat wise I think having this pokemon entirely focused on defense would be the best option. But im not saying make every other statline horrible but nothing as good as its defense. As for moves I’d like to see this pokemon having access to power gem, stealth rock, psyshock, rapid spin, calm mind, and maybe its own new signature move called asteroid shot. Now I know this pokemon wouldn’t be the best battle wise but remember this is only the 1st stage. Imagine when we get galaxagos. 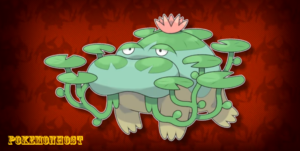 And finally coming in at the number 1 spot we have this amazing design made by fakemakeT. I don’t know what it is about the design maybe it’s just the derpy face but i like it, matter of fact I love it. And to be honest out of all of the pokemon I’ve talked about in this article Hippadrift to me is the most realistic option to be revealed as the new pokemon.

Not only is it design wise the closest to the real thing as possible but this is something I can honestly see come out of a pokemon game. I personally love how the artist was able to combine a hippo and lily pad and make something that flows and synergizes really well. Plus it can also function really well as camouflage. And with the design origin in mind I think the only logical typing for this pokemon would have to be a water and grass typing.

As for stats I can see Hippadrift functioning as a bulky defensive wall with pretty decent special attack Move-wise as long as it gets access to scald, giga drain, Ice beam, and maybe earth power I think this pokemon will be just fine. Hippadrift while not being the most badass pokemon design wise has the sort of charismatic appeal to it and I really hope it’s something we all can see in pokemon lets go pikachu and let’s go eevee.